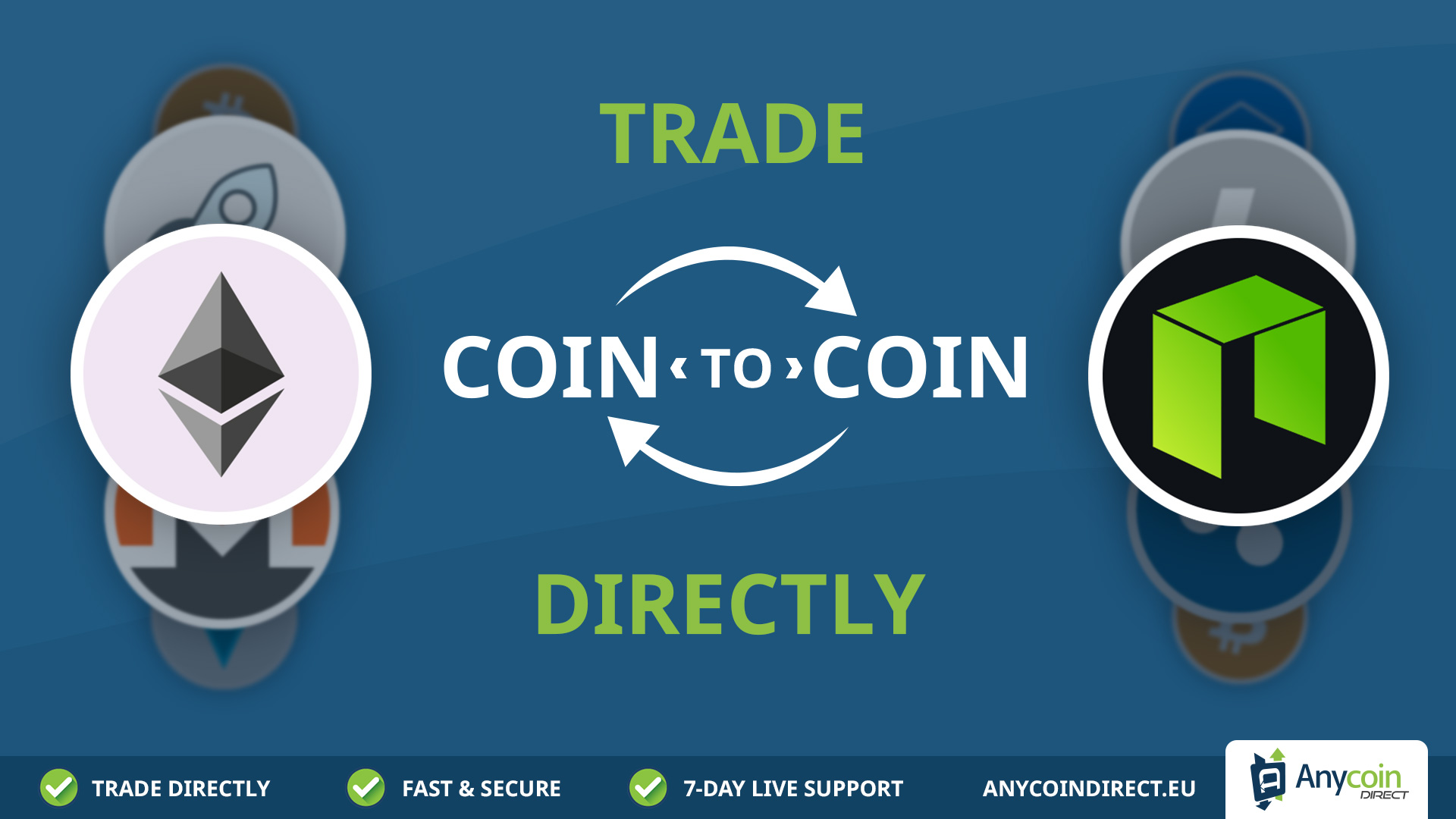 From now on, trading your favourite coins directly against each other will be fast and easy using Direct Coin-to-Coin Trading on the Anycoin Direct platform.

At Anycoin Direct they are well aware of the quickly growing and innovating cryptocurrency ecosystem. To keep up with innovations of the industry, cryptocurrency brokers need to keep developing as well, by making things easier for their customers. One of the latest developments at Anycoin Direct, lets customers trade a variety of coins directly against other coins, without using fiat currency. Anycoin Direct calls this ‘Direct Coin-to-Coin Trading’, and with this service, customers can now interchange cryptocurrencies faster than ever.

Let’s say you have Litecoin but you would rather have NEO instead. You can visit the Trade section on Anycoin Direct and choose the respective coins you would like to exchange. You can then fill in the amount of NEO you would like to have. The website will then calculate the amount of Litecoin needed to acquire your NEO coins. Fill in your NEO wallet address and confirm the order. Now all you have to do is send the Litecoin to the address provided by Anycoin Direct and wait for the Litecoin to get confirmed in the blockchain. After confirmation, Anycoin Direct will send you the exchanged NEO coins directly to your wallet. It’s as simple as that!

Anycoin Direct is one of the first cryptocurrency brokers to add this feature, which comes with some great benefits for customers. Trading cryptocurrencies will be fast because orders will be processed immediately for everyone. There is also less third-party risk involved using this feature on Anycoin Direct. By not having to go to an exchange to trade coins, customers will have full control over their coins and the corresponding private keys. Most coins available on Anycoin Direct are supported by hardware wallets which makes Direct Coin-to-Coin Trading the most secure option. This feature lets customers act on market fluctuations in a unique and powerful way. Trading coins was never this easy!

Anycoin Direct has been around since 2013 and has been one of the most trusted cryptocurrency services to anyone residing within the European Economic Area (EEA). The Support Team of Anycoin Direct understands the technology and is there to assist you 7 days a week through telephone, email and live chat, setting the industry its standard. After adding new cryptocurrencies to their platform in the past months, Anycoin Direct has implemented this feature to make trading faster and more secure. Try Coin-to-Coin trading for yourself by visiting Anycoin Direct and opening an account: Anycoin Direct